Today I was talking about the future of education with two founders of an e-learning company. We discussed why we’re drawn to creating digital learning experiences.

We all agreed that a big part of it is that we want to inspire people, rather than simply transferring knowledge in a straightforward and boring way. We want people to feel inspired enough to take action and make a change. It was at this point that I said that I could easily count the amount of truly inspiring teachers I had in my life on one hand. The others agreed.

I must’ve had well beyond 50 teachers in my life and not even 5 of those were inspiring to me. Most of them I don’t even remember.

There is one guy I remember very well, however. His name is Etienne Augé. And he’s probably the most inspiring teacher I ever had. Even today, he is still influencing a lot of the big decisions I make, even though I haven’t spoken to him properly since I graduated from university about 7 years ago.

In this article, I’ll explore what made Etienne such an inspiring teacher to me by sharing three lessons I learned from his style of teaching.

I remember the first time I walked into Etienne’s classroom. It was the typical big-lecture-hall setup. I walked in. Everyone sat down. Waiting for our new lecturer to start presenting his slides.

‘No big deal’, you might say. But in a university system where students barely take notes, because the lecturer will just share the slides with them after class… it is a big deal. A massive deal, in fact.

Because without slides, you suddenly have to start paying attention to what the teacher is saying. You will be scored on it at some point after all.

Whereas in other classes I only made a few notes for the whole semester, in Etienne’s class I could easily fill a whole notebook with my notes.

What I also loved about the no-slides approach is how it opened up the possibility for discussions. Etienne was taking a much more conversational approach to his classes, rather than the more broadcast-oriented approach other lecturers were taking.

It made me want to pay attention to whatever was happening.

I felt part of it.

Another big part of how Etienne made sure you were paying attention was by keeping you on your toes. At any moment, he could call out your name and ask you a question.

It terrified me. Honestly 😅

I hated being put on the spot like that and becoming the center of attention all of a sudden. Heck, in other classes I never even raised my hand. It was totally new to me to, again, become such an active part of the class this way.

Because I felt that Etienne cared about what I had to say.

Lesson #3: Be at the same level as your students 🤜🤛

Over time, I developed this habit where I would always be late for class. I’m not sure if it was me trying to optimise my time spent or whether I was just trying to avoid the awkward ‘dead moment’ before class starts. Probably a bit of both.

I remember running into Etienne in the bathroom once after class and he said something to me like: “I could literally set my watch to how many minutes you’ll arrive late for class”. We laughed.

I loved this little interaction, just because of how casual it was.

Etienne has a very casual style of communicating. Like he speaks on your level. Just like a friend would speak to you. A very confident friend with authority, sure. But still a friend.

He was honest too.

I remember once sending him an email recommendation for a movie I thought he’d like to see (he was teaching a movie class, so it made sense). His reply was this. 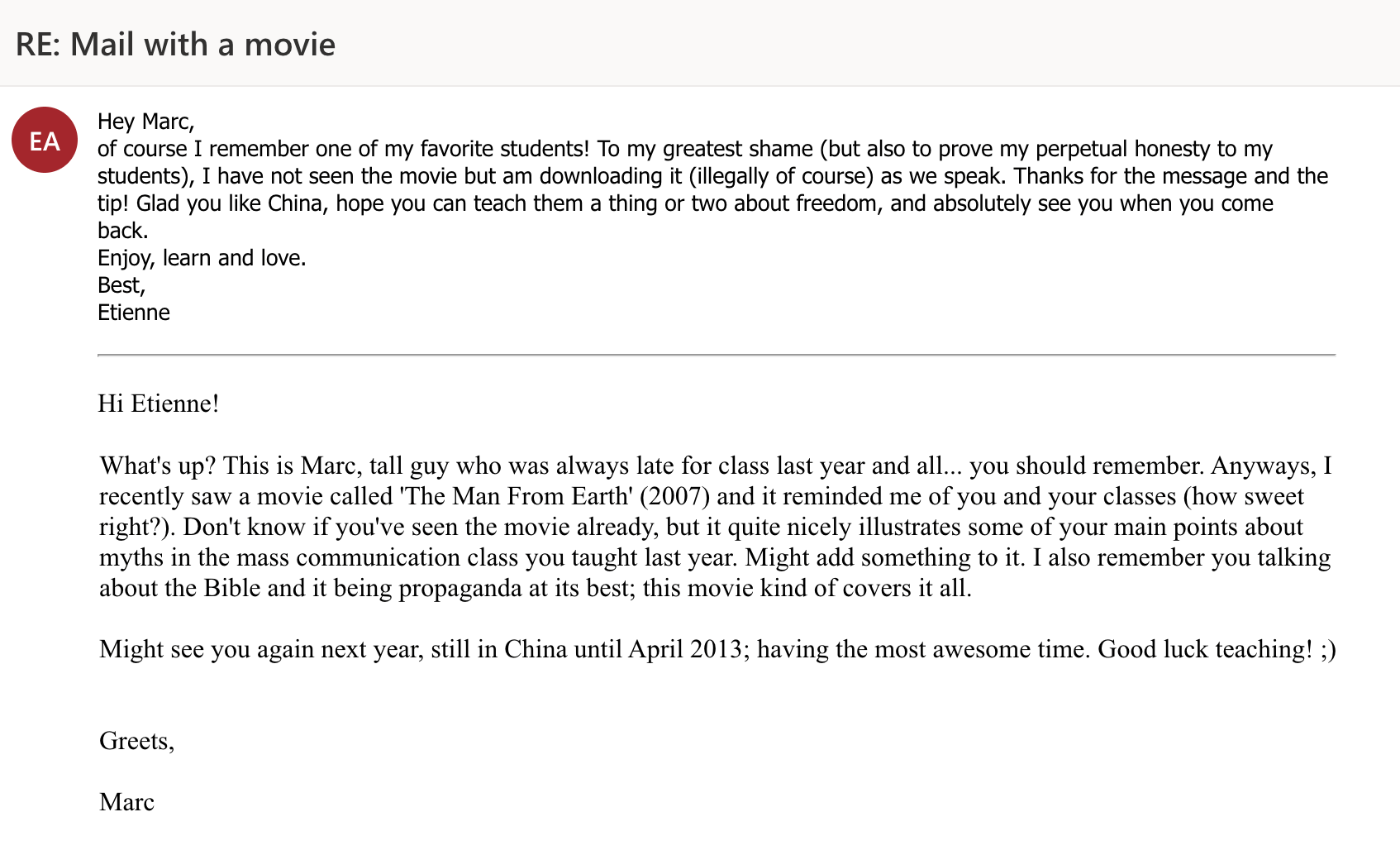 I can appreciate it when people have clear values such as honesty and they follow them. Even if the illegal downloading part is a little questionable. Then again – if we’re being honest – we all did that at the time, didn’t we? I checked, and this email was from 2012!

The real lesson here for me though is that Etienne didn’t portray himself to be any different than us. He was human. He was OK with sharing his own flaws. He dared to be vulnerable. And if you’ve ever read any books by Brené Brown, you know how powerful that is.

As a teacher, it’s easy to feel like you have to be an example. Be “perfect”, without showing any of your imperfections. While in fact, by showing your true and flawed self you may just win the trust of your students.

The key lesson: Dare to be unconventional 👽💪

As I was reading through the three lessons I learned from Etienne, I realised one thing that all these lessons have in common.

Etienne dared to be unconventional.

He did what other teachers weren’t doing.

👽 He didn’t rely on slides.
👽 He involved everyone by asking questions.
👽 He was humble and totally himself.

That was all unique. It made him stand out. It made him inspiring. It’s exactly this quality that I admired so much about the character John Keating in the movie Dead Poets Society, like when he jumped on his desk to “look at the world in a different way”. That’s what being unconventional is about isn’t it?

“The key to success is to find a way to stand out – to be the purple cow in a field of monochrome Holsteins.” – Seth Godin

Etienne taught a bit of marketing theory (officially called ‘mass communication’) as well, so perhaps he applied this knowledge to himself as a teacher. I’d have to ask him that someday. Whether he did so consciously or not, it worked. He inspired me.

More than any other teacher ever could.

Etienne, if you’re reading this: thank you for being you and for continuing to inspire me to be a better teacher and learning experience designer.

And if you’re not Etienne, then I hope you can feel inspired to improve your own teaching.

We’re all teachers in some one way or another. As friends, parents, colleagues, children or experts. Which of Etienne’s lessons can you apply to help others grow? Let me know in the comments below 👇

And when you’re at it, why not let me know who your most inspiring teacher has been so far and which lesson you learned from them? I’m very curious.

Thanks for reading. Happy teaching!